Note: This recipe is based on the super simple buckwheat groat dough recipe. Come back here once the dough is ready 🤙

During a temporary sugar-free diet 3 years ago, I got to know the gluten-free world. Among the found treasures were buckwheat groats.

A couple of years later, I ate buckwheat bread for the very first time. Amazed by this simple concept I had to replicate it, and to start experimenting with it. After some rather boring and failed attempts, I eventually figured it out.

Nowadays, I bake it where ever I’m living. Mainly because it’s so easy to make, it’s delicious, and filling. And people love it! Numerous times I’ve been asked for the recipe, and these requests eventually resulted in developing this website.

The beauty about this recipe is, that you can add pretty much anything you like into the mix. I explored both directions – savoury and sweet. That resulted in my buckwheat banana chocolate bread recipe, that is also very much appreciated.

So let’s get baking!

Note: The preparation time assumes you have prepared the dough already.

This site uses Akismet to reduce spam. Learn how your comment data is processed. 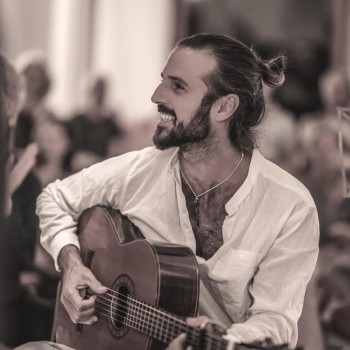 A Swiss nomad pursuing and offering his passion for healthy plant-exclusive cuisine and creating safe spaces for people to express their voices.

Want to receive an occasional email with public events that I'm offering?